A nice range, including some bourbons today

Another nice meeting, with some special guests and bottles to taste.

We had the opportunity to taste a nice GLENCADAM, 15 years, 46% brought to us by SAIGON HAMPER 2, 260 Nam Ky Khoi Nghia, Q3, TP HCM. Here is a tasting review from whiskyfun.com :

Colour: straw. Nose: it’s not that often than a 15 is a 10+5 years, if you see what I mean. Yeah, well, I mean that this one noses exactly like the 10 with five extra-years, that is to say with more vanilla, more spices (soft ones here) and a more refined fruitiness (added ripe strawberries here). The rest is similar (apples, lemon, wax, smoke.) Very nice. Mouth: exactly the same happens on the palate, all flavours playing louder this time. That means that it’s big whisky, full flavoured, interestingly citrusy and getting maybe just a tad too grassy/dry after a while. Quite some vanilla. Gets then funnily medicinal (no Laphroaig though), a tad camphory. Eucalyptus drops. Finish: long, still very zesty. Comments: more complexity in this one, a very entertaining profile. We like this one a lot, and it’s rather fairly priced.

Then we tried some bourbons, introduced to us by Libra, 206 Nam Ky Khoi Nghia, Q3, TP HCM

Okay, no bourbon. I’ve read this was heavily filtered. Colour: gold. Nose: interesting! Rather un-bourbony and quite waxy, grassy and mineral, which are notes that are usually more to be found in the Highlands of Scotland. Yet, there is quite some vanilla and touches of burnt syrup. A little cardboard again, toasted wood… The whole is pleasantly light and void of any heady caramelly notes. Mouth: sweet and sexy, with an oily mouth feel, starting with notes of strawberry and pineapple sweets that make the whole liqueurish. Goes on with more liquorice and a little curry, and always this oily mouth feel. Is there sugar? Finish: medium long, still sweet and fruity, also with more pepper and hints of bitter chocolate. Comments: nice nose and palate but both are hugely different. Two whiskies in one? SGP:351 (nose) and 620 (palate) – 78 points.

And then the JACK DANIEL’S SINGLE BARREL

Jack Daniel’s Single Barrel Jack Daniels Old No 7 is world famous, and has a taste that is familiar to many, so when you try something like the Single Barrel, you expect a similar taste. And that’s exactly what you get, although with a few significant differences. The first being that this is a decidedly richer taste compared to its little brother, it’s almost a little more upmarket, but it’s smoother and easier to drink than its compatriot.  If you’re a fan of Jack Daniels Old No 7, then this will open your eyes as to how much more they can get out of their spirit. If you’re not a fan, then it’s worth a try just because it has noted differences and better qualities than the normal supermarket variety bottles.

Find out more about Bourbon’s tasting reviews from whiskyfun.com

This entry was posted on August 24, 2012 by sylvainlorillou in Reviews. 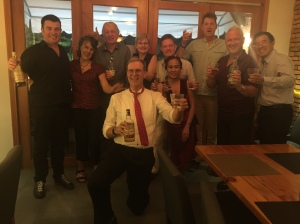